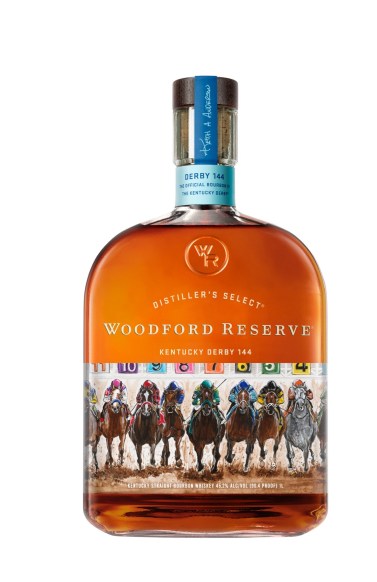 Woodford Reserve is honoring “the greatest two minutes in sports” with the release of its 2018 Kentucky Derby commemorative bottle. The limited-edition Woodford Reserve bottle features the colorful artwork of Louisville artist Keith Anderson.

Anderson has for 11 years worked in the Bourbon Street Café, the private dining room at Brown-Forman headquarters in Louisville. At the 2017 company Derby party, while Anderson was stocking the bar, he told Mark Bacon, senior vice president at Brown-Forman: “These artists before me, they’re good, but I’m no slouch. One day, I will have that Derby bottle.”

Anderson has drawn and painted since he was a child, but he’s never been a full-time artist. He sold artworks to friends to pay his tuition at Murray State University and, later, at the University of Louisville. He now has a studio in his home where he paints quietly in the middle of the night and sells artwork mainly to friends and family.

The Derby bottle has been an annual collector’s item anticipated by bourbon and racing fans since 1999. Beginning in 2003, Woodford Reserve began featuring the work of national artists. This year’s bottle— the 19th in the series—features Anderson’s stunning painting of powerful thoroughbreds as they break from the starting gate, in the glory of their colorful racing silks.

“Sometimes we overlook the very talent that’s right in front of us,” Bacon says. “We are deeply honored to start this new partnership with Churchill Downs—and to celebrate it with the beautiful artwork of Keith Anderson.”

The 2018 Kentucky Derby Bottle hits shelves nationwide in March 2018 with a suggested retail price of $43.99. It can also be purchased online at Reserve Bar.