Teeling Whiskey unveiled the fifth and final bottling of “The Revival”, a 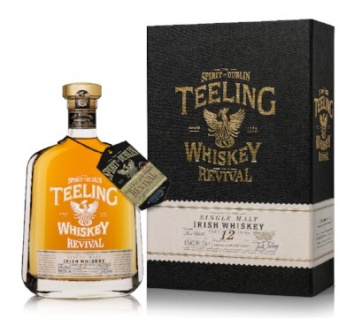 limited-edition, award-winning, commemorative Irish single malt. The The Revival Series was originally crafted to celebrate the opening of the Teeling Whiskey Distillery and with that, the revival of the tradition of distilling in Dublin.

The final bottling of The Revival precedes the launch of the first new Dublin distilled whiskey for over 40 years. Teeling Whiskey’s Single Pot Still Irish whiskey, fully distilled in the Teeling Whiskey Distillery in Dublin’s Newmarket, will be released later this year.
The Revival Vol. V joins Teeling Whiskey’s range of award-winning Irish whiskeys, which have collected over 175 international awards over the last five years. The fifth bottling of The Revival consists of 12-Year-Old Single Malt that was aged initially in ex-bourbon barrels before being finished in a combination of Cognac and brandy barrels, imparting distinct hints of toasted almonds and freshly pressed grapes. Limited to just 15,000 bottles, the resulting Single Malt is then bottled at 46 percent ABV with no chill filtration, a signature of all Teeling Whiskeys.

“We are delighted to launch the last release in our award-winning Revival Series, just a few months before our first Irish whiskey will come of age from our Dublin distillery,” says Teeling Whiskey founder and managing director Jack Teeling. “The Revival Series was originally launched to celebrate the rebirth of distilling in Dublin, so the timing is fitting to end the series now, as we enter a period of renaissance for the capital with the launch of the first Dublin distilled Irish whiskey for over 40 years.

“We are also very excited to announce plans for the release of a very special celebratory Single Pot Still bottling of one of our very first casks of new whiskey scheduled for August,” Teeling continues. “To celebrate the launch, we will auction 100 of the very first bottles of our new whiskey, with all profits going back to local Dublin 8 charities. This will be followed by the commercial release of the Teeling Whiskey Single Pot Still in November.”

The first 100 bottles will be auctioned online with the balance to be sold in the distillery itself. One of the core founding principles of the company was to give back to the local community that has welcomed Teeling Whiskey so well over the last 3 years, so we are incredibly proud to be giving back all profits from this first release to a selection of local Dublin 8 based charities. The Revival Vol V is available to purchase now with an RRP of €120.00. The product will be available in Ireland at the Teeling Whiskey Distillery in Newmarket, Dublin Airport, The Celtic Whiskey Stop, all good independent off licences before being launched into international markets such as the UK, Germany, Belgium, Holland, Denmark and Italy.