Can’t believe it’s almost here! My book, The Year of Drinking Adventurously (52 Ways to Get Out of Your Comfort Zone) 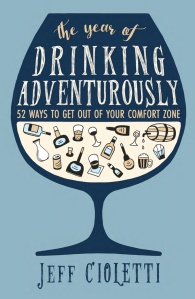 officially hits the street on Nov. 24, but the adventure starts a few days early. And, instead of a typical launch party, it’ll be a launch BAR CRAWL! What better way to reflect the diversity of beverages showcased in the book than to hit an array of venues that specialize in some of those specific drinks/styles? It’ll begin in the afternoon of Saturday Nov. 21, and continue into the evening. You’re all invited to come to as many or as few of the stops as you’d like. I’m still ironing out the exact itinerary (frequent updates will follow) but the most likely starting point will be Jimmy’s No. 43 on E. 7th St. at 2 pm. And, if you plan on showing up for some of the later stops, don’t worry about not being able to find us. We’ll adhere pretty closely to a schedule and will have frequent social media updates throughout the day detailing our whereabouts. (I’ll also be hauling copies of the book in both hardcover and paperback formats for sale and signing). The official hashtag is #Drinking52.

Here’s the press release for the launch event:

‘THE YEAR OF DRINKING ADVENTUROUSLY’ KICKS OFF
WITH NEW YORK BAR CRAWL
Author Jeff Cioletti celebrates the launch of his new book at six locations in Lower Manhattan and Brooklyn, Saturday, Nov. 21.

NEW YORK—When your book is titled “The Year of Drinking Adventurously,” hosting a simple book-launch party would seem a bit of a cop-out. That’s why author Jeff Cioletti will lead an adventure across multiple facets of New York City’s drinking scene to celebrate the release of the new title from Turner Publishing. On Saturday, Nov. 21, three days ahead of the book’s official drop date, Cioletti will host a book launch bar crawl through Lower Manhattan and parts of Brooklyn, beginning at 2 pm and encompassing six drinking establishments. Each stop will reflect a different topic in “The Year of Drinking Adventurously,” from whiskey and beer to sake, shochu, tiki drinks and beyond. Many of the bars on the itinerary are featured in the book. The pay-as-you-go crawl is open to the public (21 and over only) and will follow a schedule to be determined.

“We’ll update via Twitter and other social media channels throughout the day with our exact location at any point in time,” Cioletti says. “Join us at as many stops as you can, whether it’s just one or all six. It’ll be a day of drinking adventurously.”

Here’s the official description of “The Year of Drinking Adventurously: 52 Ways to Get Out of Your Comfort Zone:”

You want a little adventure in your life. And why not? With thousands of breweries and distilleries in the United States, there are more choices than ever on tap and behind the bar. So many, that you’re a little bit intimidated. But throughout the course of a year you can learn to impress your friends by becoming a pub savant withThe Year of Drinking Adventurously, a guide to getting out of your beverage comfort zone once a week for a year. Each of the fifty-two chapters features the story behind a unique beer, spirit, cocktail or wine, designed to broaden your drinking horizons. Some correspond with specific seasons or holidays, encouraging you to forget the million-dollar marketing-supported “conventional wisdom” and drink against the grain. It’s Cinco de Mayo? There’s much more to the celebration than lime-enhanced lager and shots of rotgut tequila. St. Patrick’s Day? Do you really want to be the 700th person of the evening to order a green-tinted brew and a shot of cheap whiskey? The Year of Drinking Adventurously takes the social imbiber on a journey into the exciting and unknown—one week at a time.