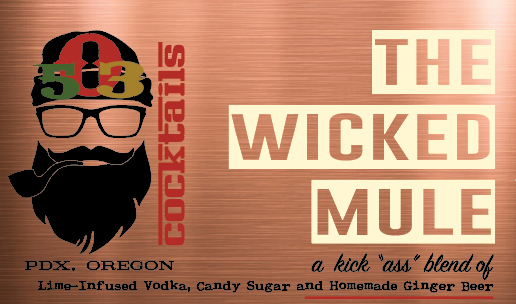 503 Cocktails is launching its first canned cocktail, The Wicked Mule, this week which is available in liquor stores around the Portland, Oregon metro area, just in time for Christmas. The Wicked Mule is a local take on the classic cocktail of a similar name—503 adds vodka, real ginger, candy sugar, a good spritz of soda water and a hint of lime to allow the enjoyment of craft cocktails beyond the purveys of local bars and restaurants.

Rusty Caldwell, 503 Cocktails co-founder Rusty Caldwell reveals his inspiration for the Wicked Mule in a can: “One hot day while hiking in the Mount Hood Wilderness, I sat down to take a swig of my warm, near empty water bottle and thought to myself ‘ I could really use a cold stiff cocktail about right now’. From then on, it was my goal to create a delicious cocktail in a can that was ready to go and not mixed by some 22 year old liberal arts major who now calls himself a ‘mixologist’.”

In the past, canned cocktails were not widely available in Oregon liquor stores, however, with the rapid national growth in craft spirits and the wide acceptance of high quality canned beverages such as craft beer, 503 Distilling’s founders thought the timing was right to launch a novel product.

“We felt that while liquor stores in Oregon have in the past been relatively featureless retail outlets, the new emphasis of the Oregon Liquor Control Commission on creating novel retail outlets would allow new products such as canned cocktails to thrive,” says 503 Distilling co-founder Dave Schleef. “The Wicked Mule is our first attempt at potentially opening up a new beverage category here in Oregon that previously was non-existent.”

503 Cocktails plans to initially roll out The Wicked Mule in Portland Metro area liquor stores and shortly thereafter, in the rest of the state.