Editor’s note: After I visited Kentucky last year, I wrote up a gargantuan piece on my experiences in bourbon country. I’ve decided to post it in installments to spare you from such an oppressive read.

Part 1: Beyond the Trail

As Kentuckians in the know like to point out, the Bluegrass State contains more aging barrels of the native spirit than it does people. And that’s no joke. As of the most recent tally, there are about 4.4 million people calling it their Old Kentucky Home, versus just shy of 5 million charred-oak aging corn-centric whiskey.

Of course, travelers can visit these wooden wonders, especially since distillers have spruced up their facilities to make them presentable for company. There’s the Kentucky Bourbon Trail, featuring distilleries such as Four Roses, Jim Beam, Maker’s Mark, Wild Turkey, Woodford Reserve and the Heaven Hill Distillery’s Bourbon Heritage Center. As the name of the latter suggests it’s more a museum than an actual distillery. In fact, there’s really no distillation going on there. It’s not really the company’s fault. There was an epic fire back in 1996 that destroyed its production plant and many of its warehouses.

Don’t get me wrong, there’s stuff to see. There’s still a veritable city of tin warehouses dotting the grounds, each home to thousands of barrels of aging bourbon. And Heaven Hill remains the largest distillery that remains family- and Kentucky-owned, as the spirits market is tightly consolidated. As cool as it may be to enjoy such a seemingly down-home artisanal experience as dipping the neck of your own Maker’s Mark bottle in hot, red wax (yes, you actually can do this) keep in mind that Maker’s is now owned by multinational distilled spirits conglomerate Beam, Inc., whose annual revenue tops $3 billion. It, of course, does not diminish the quality of the bourbon. Maker’s Mark is some of the finest product out there. But if you’re trying to avoid busloads (and trolley-loads) of tourists descending upon each stop of your excursion like hungry locusts, then leave distilleries such as Maker’s or even the still-independent Heaven Hill off of your itinerary. Stop in the gift shop, buy a bottle or four, maybe some bourbon-infused mustard or hot sauce and be on your way.

Barely a half-mile from the Heaven Hill Bourbon Heritage Center is the Willett Distillery, a much more intimate, yet vastly more rewarding, affair. In fact, its very existence is far more understated than that of Heaven Hill. Willett first opened in 1936, three years after the repeal of Prohibition, and has been a family operation ever since.

Now, there’s one small caveat. There hasn’t been a continuously operating distillery on the grounds during the past eight decades. For about 30 years between the early ’80s and 2012, its brands were being produced under contract at any number of outside facilities. Willett, which, at the time, had been operating under the corporate moniker, Kentucky Bourbon Distillers, was aging its bourbons and ryes on-site and operating as a bottler for others’ products. It just wasn’t physically distilling.

However, that all changed in 2012, as the bourbon renaissance (as well as that for other high-end whiskeys like rye) reached a fever pitch and looked like it was here to stay. The company opened a visitor’s center, refurbished its distillery and production resumed once more at Willett. 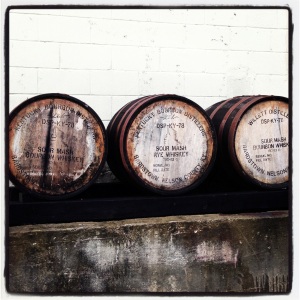 I first got a true sense of the low-key nature of the operation before I even rolled onto its grounds. I passed the relative monstrosity that is the Heaven Hill site, with all of its not-so-subtle visual fanfare leading to it and surrounding it once I was upon it. It’s pretty hard to miss. But as I drove past it, I caught a smallish, unassuming “Willett Distillery” sign out of the corner of my eye once I drove past the Bourbon Heritage Center. Soon I was surrounded by the welcoming sight of more of those tin warehouses before I found the visitors’ parking lot. I was a few minutes late for the hourly tour, but I was able to catch up with the tour guide and the one other person on the tour. Talk about intimate! Okay, it was the first tour and tasting of the day—10 a.m.—but judging by the volume of cars in Heaven Hill’s visitors’ parking lot, not to mention the horrifying presence of a tourist bus docked there at that hour, Willett was clearly the more desirable option in Bardstown no matter what time it may be.

The older white-haired gentleman who was the only other member of my tour group whispered to me in his best cloak-and-dagger tone, “Do you know about this other passport?” He produced the Kentucky Bourbon Trail “Craft Tour” passport, which features some more off-the-beaten-path facilities than the ones on the Kentucky Bourbon Trail proper. In addition to Willett, the Craft Tour includes Barrel House Distilling in Lexington, Corsair Artisan Distillery in Bowling Green (Corsair has another operation in Tennessee), Limestone Branch in Lebanon, MB Roland in Pembroke, Old Pogue in Maysville and Silver Trail in Hardin.

Okay, the Craft Tour isn’t nearly as clandestine as my tour mate wanted to paint it, but there is a small sense of being “in the know” when you’re eschewing the Disneyfied theatrics of some stops on the main trail for the more-David-than-Goliath elements of the smaller indies.

The biggest highlight of the Willett tour (aside from the grand finale, the tasting) is inhaling the delightful vanilla-scented complexity of the aging whiskey in one of the distillery’s handful of tin warehouses. Oh, if barrels could talk.

After the tasting, I recommend that you pick up a bottle of Willett Pot Still Reserve, in a glass container that’s actually shaped like a pot still. Spring for the elegant wooden box—especially if you plan to fly home; the long neck of the bottle is very likely to break. If master distiller Drew Kulsveen is lurking about, you might even get him to sign the box (Drew is founder Thompson Willett’s grandson. Drew’s mother, Martha Thompson, married Even Kulsveen, who bought the company in 1984.) Again, keep in mind that it’s likely that the contents of your particular bottle were not actually distilled on the Willett campus. Even though the distillery is now up and running, remember that it’s not bourbon until it’s been aged for at least two years. And the folks at Willett prefer to extend that to four. So if you visit before 2016, you can assume it was produced elsewhere. But take comfort in the fact that it was aged and bottled on those very grounds. And really, bourbon’s really all about the aging, isn’t it?

The allure of things small and intimate should not deter travelers from visiting a truly sprawling distillery operation—the, well, operative word being “operation.”