Editor’s Note: This is the second of three parts recounting my recent adventure into bourbon country. For part 1, click here.

Part 2: Where the Buffalo Roam (and we drink)

The allure of things small and intimate should not deter travelers from visiting a truly sprawling distillery operation—the, well, operative word being “operation.”

Interestingly, the one worth visiting isn’t even on the official Kentucky Bourbon Trail. It jumped ship from the Kentucky Distillers Association (KDA)—whose dues-paying members enable such a trail to exist—but its tours are very much in full swing and should be a required visit for anyone stepping foot in the state with the grass which is blue. I’m talking about the Buffalo Trace Distillery, owned by Louisiana-based Sazerac. The folks at Sazerac gave no reason for the company’s abrupt decision to ditch the KDA in 2010, but there’s some speculation that it was an issue of not playing well with others. In other words, the top brass decided it was a better use of time and resources to promote the most important distillery to Buffalo Trace (that being Buffalo Trace, natch), rather than be part of something that shines as much of a spotlight on those that compete with the mighty prairie beast.

On the outskirts of the commonwealth’s capital of Frankfort, hidden down an old back road called Great Buffalo Trace (what else?) is the distilling compound composed of a series of early-20th-century brick industrial buildings, the type that have long since become luxury condos and entertainment complexes in gentrified areas of post-industrial America. But these are working spirits production houses, with a Buffalo Trace logo-emblazoned water tank towering over it like the Eye of Sauron, always observing and ensuring the venerable distillery’s legacy remains intact in the hands of these mere mortals.

Remember how I was rhapsodizing about the glorious fragrance of bourbon aging in charred oak barrels? The air surrounding the Buffalo Trace grounds takes that to a whole new level. The moment I stepped out of my rental car, I was hit with that intense vanilla-tinged goodness. But when I walked about three feet, that toasty, grainy aroma that makes me weak in the knees when I visit beer breweries wafted into my olfactory system. Another three feet and it was the aging bourbon again. It alternated like that until I entered the front door of the visitors’ center. Is there somebody standing on top of a roof with a hose, just pumping a scented mist as part of the experience (like I’m absolutely convinced every Dunkin Donuts in America does)? Disney, in its hyper-contrived 24-hour marketing cycle, may claim that its theme parks are the Happiest Places on Earth. And they’re very much manufactured to be that. But I think Buffalo Trace may very well be the Best-Smelling Place on Earth. 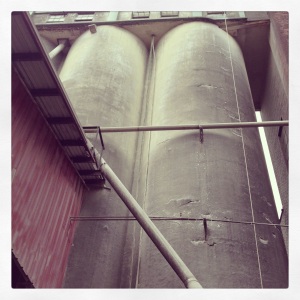 If you ever make it to this oasis in Frankfort, Ky., be mindful of which Buffalo Trace tour you book. There’s the regular public affair (the “Trace Tour), which happens every hour on the hour from 9 a.m. to 3 p.m. on weekdays, 10 a.m. to 3 p.m. on Saturdays and on Sundays between April and October, 1 p.m. to 3 p.m. That’s your garden variety tourist experience: You’ll watch a video at the beginning, they’ll walk you through the bourbon warehouses and then take you to a room where Blanton’s is being hand-bottled and labeled. Anyone can walk into these tours (provided that you’re on time) and you don’t need a reservation. Avoid that tour.

The one you want is the so-called “Hard-Hat Tour.” Despite the fact that there was nary an actual hard hat as far as the eye could see, this is the one where visitors really feel like they’re part of the operation.

There’s something almost Dickensian about this living antique of an industrial setting. It makes a lot of sense because distilling activities predated the current operation by about a century and a half. Historical documents claim that there’s been one form of distilling or another happening there since the early 1770s. Harrison Blanton (namesake for Blanton’s bourbon) built a more commercial operation there in the early 19th century and five decades or so later, it was sold and became the O.F.C. (Old Fire Copper) Distillery. 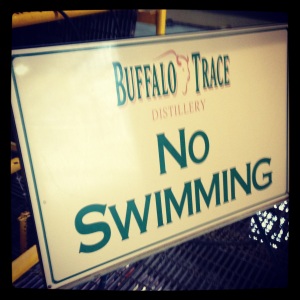 The facility continued to operate during Prohibition, distilling whiskey for (wink wink) “medicinal purposes.” (Getting a Repeal-sympathetic physician to write a liquor prescription in those days was about as difficult as getting one for vitamin D today.) It was most recently called the George T. Stagg Distillery before it changed its name to Buffalo Trace and subsequently introduced its namesake bourbon in 1999.

The staff at its current iteration call it a “fully intact and operating example of technology from the period between 1933 and 1953.” It really does look that lived-in and unadulterated, save for the decidedly 21st-century computerized quality control monitor, manned by a rather bored-looking QC guy who probably would much rather be running around, putting out fires throughout this Willy Wonka of a distilling wonderland than staring at a screen all day.

There’s a lot of climbing up narrow ladders and the craning of necks over gargantuan mash fermenters of bubbling corniness. Sometimes you may even feel a stray kernel or two falling on your hard-hat-less head.

There’s not a lot of climate control going on, so I warn you: If you visit in August like I did, expect a goodly volume of perspiration. If you want to be comfortable, take the Trace Tour with the rest of the bus riders, you tourist.

If you’re lucky, you may even get a chance to swig a little unaged white dog—the undiluted distillate—right out the still. Don’t be put off by the fact that the tour guide is letting you taste it from the same glass from which the other 14 people in your group are sampling it. The stuff’s 148 proof; believe me, no germs are surviving anywhere near it.

I expected it to be all burn and no flavor, but I was pleasantly surprised. While it was incredibly rough around the edges, I got a tremendous blast of corn’s essence on my palate. 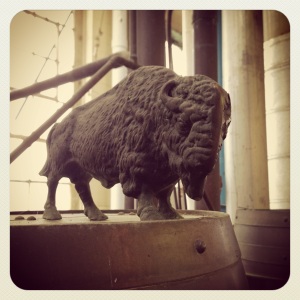 Of course, when you get to the proper tasting at the conclusion of the Hard Hat (-less) tour, you’ll get to use your own glass. You only get to sample two. “I gotta send you out street legal,” Shelly the guide said, “whether you’re driving or not.” I had the eponymous bourbon, as well as Eagle Rare. I was bummed that Blanton’s wasn’t an option, but the gift shop was selling it for $55 a bottle, so that pretty much explains why. I did get to see it being hand-bottled and labeled (as one can on the Trace Tour, as well), so I guess I should just be happy with that.

Among the other options at the tasting counter was Rain vodka, also a Sazerac product. But this is bourbon country. Why would you want to try anything else?

I was indeed street legal when I left, which was a good thing, as I had to make it back to Louisville for the actual bar crawl of this excursion.

To Be Concluded. Next Time: The Urban Bourbon Trail